Euro Summit: “no sense of urgency but it’s urgent”

Eurozone reform has once again been overshadowed by Brexit. Today’s Euro Summit was no exception. In the last two years, new reforms have been postponed again and again. The sense of urgency is still there, but disagreements among member states still look hard to be bridged before the end of the year

Eurozone reform was on the agenda, but not top of mind
Completely overshadowed by the EU Summit covering pressing matters like Brexit and migration, monetary union reform was also on the agenda at the so-called Euro Summit, a lunch meeting at the end of almost two long days. As expected, no decisions were made but the plan to have further reforms of the monetary union centre stage at the December summit was confirmed. In June, EU leaders had decided that they would revisit the reform agenda at the end of the year. Whether the December Summit will really bring a breakthrough is far from certain. Final words by European Council President Donald Tusk were not really encouraging as he stated that technical work had to be accelerated and that he hoped that today’s discussion would inspire the Eurogroup to act more dynamically. European language for “a lot has still to be done”.

Today’s meeting focused more on containing existing problems than on shaping the future. The economic uncertainty that the Eurozone faces was not lessened by the Summit. As the Brexit negotiations will go down to the wire, downside risks to the outlook remain. Concerns about the Italian budget also remain, which was discussed just briefly at the Euro Summit as that remains a matter of the Commission and not European leaders for the moment.

While European Commission President Juncker said at the press conference that there is “no sense of urgency but it’s urgent” about Eurozone reform, the question remains whether meaningful strengthening of the Eurozone can be achieved. More concrete steps towards completing the banking union still need to be taken, but President Juncker said today that only a handful had been agreed so that “there remains ample work until December”. The danger, of course, is that the December Summit could be overshadowed again by the Brexit debate, postponing the Eurozone reforms to 2019.

Major steps still have to be taken
The recent reshuffling of the Government in France did not change the direction for Emmanuel Macron, whose intentions remain unchanged since the September 2017 Sorbonne declaration. During the Meseberg Summit in June, France and Germany came to agree on the creation of a Eurozone budget for 2021 and on deciding on the rest in December. This includes further steps in the banking union. However, only the initial exploration phase of a European Deposit Insurance Scheme has been announced so far and the Franco-German proposals received lots of criticism from other Eurozone countries, particularly the Nordic countries plus the Netherlands.

Recent political developments in Germany have also done little to become overly optimistic about bold reforms in December. First of all, the interpretation of what a Eurozone budget could mean and be still differs across countries. The latest news on German Finance Minister Scholz’ non-paper on a European Unemployment Stabilisation Fund and the immediate criticism from coalition partners suggest that little is left from the title of the official coalition agreement “A new dawn for Europe”. There is currently even some speculation in Berlin that the German government is actually looking at the Spring Summit 2019 and not the December Summit this year to agree on Eurozone reforms. But then really…

4 scenarios for the Eurozone future 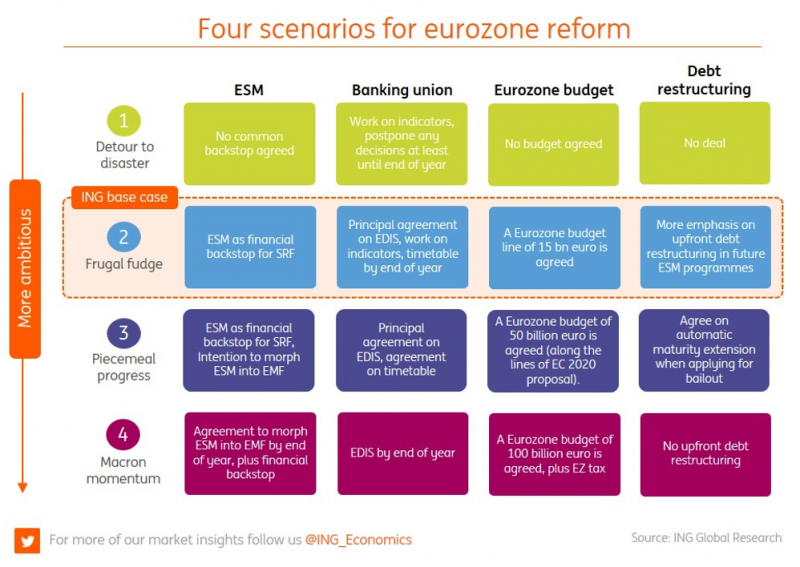 No reforms without a new existential crisis first?
All of this means that the so-called window of opportunity to agree on bold Eurozone reforms, which opened up after the French presidential election and before the German elections last year, is almost closed again. It is not completely locked, though. Except for making the ESM the backstop for the Single Resolution Fund, some additional upgrading of the ESM and lip service to finalise banking union, very little progress should be expected at the December summit. It increasingly looks as if the Eurozone will first need a new existential crisis before agreeing on bold reforms.