What to watch in the last four weeks ahead of the elections, held between 23 and 26 May

Tonight will be the unofficial kick-off of the final stretch of the European election campaign. In a TV debate in Maastricht, five so-called Spitzenkandidaten (lead candidates) will present themselves to a broader European audience. The organisers of the event have invited “all the European political parties who have formally designated or intend to designate a candidate for the post of President of the European Commission to take part in the debate.” The debate will be in English. Anti-European parties have not nominated a Spitzenkandidat and are consequently not joining the debate while front-runner Manfred Weber from the EPP, which is currently the largest party in the European Parliament, has cancelled his participation. On 15 May, the European Parliament will hold the one and only official TV debate for all official Spitzenkandidaten.

Another make-or-break election?
From regional elections in Spain or Germany to national and European elections, it is hard to remember any single election in Europe which has not been labelled as important, crucial or trend-setting. This year’s European Parliament Elections are no exception. While in the past, European Elections have been a low-key event with low participation rates, many financial market participants now pay a lot of attention to them, fearing a significant rise in EU-sceptical forces on the back of growing support for populist and anti-EU parties in most national elections in recent years. The fear is that the upcoming European Elections could even mark a step towards European disintegration, transforming the traditional pro-EU European Parliament into an EU-sceptical parliament.

However, despite the rise of populist and EU-sceptical parties in national elections, there are several reasons to expect no significant change in the election result of the EU-sceptical parties compared with the last elections in 2014 (when they received some 20% of the seats in Parliament):

The 2014 European elections were a leading, not lagging, indicator for EU-sceptical parties’ national election performances. Many parties saw significant gains in the 2014 elections followed by similar performances at subsequent national elections, particularly in the case of Front National and the Dutch PVV. Given recent polls, gains should only be expected from parties which did not do well in 2014 but have performed better in the more recent past, for example the German AfD, the Italian Lega, the Austrian FPO or the Dutch FvD.

Much of the EU-sceptical parties' impact after the elections will depend on whether or not they are able to work in and as one single group. In this regard, the latest initiative started by Italian Vice-Prime Minister Matteo Salvini to unite Europe’s populist parties is noteworthy. However, the fact that only three parties (Germany’s AfD, the Finns Party and the Dansk Volkeparti) showed up, illustrates how difficult such a project will be. Even though most European populist parties have gained electorate support on the refugee topic, they differ on possible solutions as well as on other topics. It simply remains hard to be a pan-European nationalist.

Populists on the rise in the next EP? - Think twice, it's all about Lega 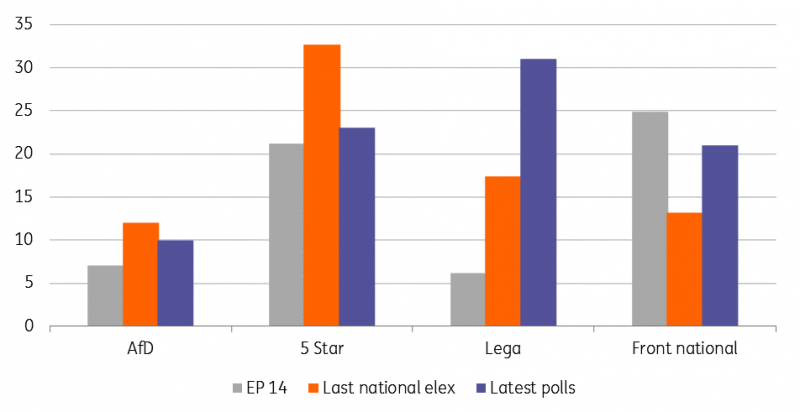 Brexit uncertainty
In preparation for Brexit, the EU27 reallocated 27 of the 73 UK seats among the other member countries and reduced the total number of seats in Parliament from 751 to 705. As more than 50% of the current 73 British MEPs sits in EU-sceptical political groups, Brexit would have automatically tilted the balance towards a pro-European Parliament. Now, as the UK seems to be back on board, at least temporarily, these changes will not be in place. At least for now, British participation at the European Elections would – according to recent polls – bring the S&D group closer to the EPP. Change UK and the Brexit Party have not yet said which political group they would join but would bring more votes to the broader group of EU-sceptical parties.

With the UK participating in the European Elections, EU-sceptical parties stand a greater chance of reaching one-third of all parliamentarian seats. In theory, and if they were able to work together, this one-third could, for example, block sanctions against member states that violate EU rules and the rule of law, could derail EU budget negotiations, and could be an obstacle to trade deals and appointments to the European Commission. A lot will obviously depend on how the new British MEPs behave (and vote) in the new Parliament.

Another kind of Brexit

Exciting but no shocker
In our view, the results of this year’s European Elections should be less of a shocker than many currently fear. Instead, it will again be a mixture of nationally influenced votes with slightly more European themes than usual. The biggest risk from the European Elections would therefore be the potential national fallout. Just think of the German government, which could eventually fall in case of severe defeats for at least one of the coalition parties, or France, where voters could use the elections to voice their assessment of recent policy announcements.

For the European Parliament, we would expect some erosion of the political centre, with social democrats and conservatives losing their absolute majority for the first time since 1979. This would continue recent national trends though this could be mostly offset by gains for the liberals and Greens. A delayed Brexit has increased the risk of a growing number of total seats for EU-sceptical parties, with a power shift within the different groups.

As a result, the political centre will be more fragmented than in the past but overall sentiment in the European Parliament should remain pro-EU, with the clear disclaimer that there are no real counterweights to EU-sceptical parties. The pro-EU parties have always been and are likely to continue being “pro-EU but…” parties. Therefore, the risk of the European elections is not so much the rise of EU-sceptics but rather the risk that the mainstream will move closer to EU-sceptic platforms instead of differentiating themselves, as well as some potential national fallout. In a best-case scenario, the EU's former slogan, “United in diversity” will morph into “United in even more diversity”. In a worst-case scenario, it could be “Diversified Union”.