Emperor Draghi’s not naked, the ECB has corporates (and banks) in CSPP2

Mario Draghi’s hints at possible new monetary stimulus has got the market thinking: Has he still got the magic, or is he just an emperor trying to dress in new clothes? To us it’s clear: He does have a new tool and the Corporate Sector Purchase Programme 2 could just be around the corner

All dressed up. ECB President, Mario Draghi, receives an honourary degree in Bologna, Italy in February 2019

Targeting corporates will squeeze credit spreads
The talk in fixed income markets for a while now centres on the European Central Bank's readiness to restart new stimulus. We covered it here and discussed the various routes that could be taken, from rate cuts to renewed quantitative easing to buying stocks.

And we see ample reason to expect the ECB to target corporates again and that means credit markets are set to be supported. With the ECB only one economic slip away from another rate cut, speculation about what ammunition the ECB still has left will continue.

For the past eight years of his presidency, Mario Draghi has shown an impressive determination to act. Nothing is worse than a central bank admitting it has run out of options. In this regards, besides a possible rate cut, restarting QE looks as though it'll be the most likely option. Even though a restart of QE would fall into the category 'more of the same', we would be very cautious calling Draghi an emperor with new clothes.

In fact, in our view, the emperor is not naked at all; he has corporates, and banks, in CSPP2.

The report states 'An ample set of analytical studies attributes a sizeable part of these developments directly to the effects of the programme' and '..indirectly, the CSPP has also had positive knock-on effects on the wider financing environment for firms in the euro area'.

We view both comments as rather contentious but they do highlight how fond the European Central Bank is of CSPP. To strengthen that view, we went through this report from 2018 where the ECB discusses that, despite the absence of an explicit environmental target, the CSPP purchases have led to green corporate bond spreads steadily tightening, and they claim; 'a significant part of this effect can be attributed to the Eurosystem’s purchases.'

We believe this comment is rather ambitious and self-praising to put it mildly. All spreads were tightening and the Green market was becoming mainstream with real money investors. CSPP, in essence, was nothing more than a vacuum cleaner hoovering all bonds in its wake, regardless of nationality, sector or Environmental, Social and Corporate Governance (ESG) status.

Bank bonds 'clearly in the running'
Looking at the availability of assets, headroom in other purchasing programmes will be limited but this is not the case for corporate bonds, so in this regard, there are two reasons to be cheerful.

Firstly, plenty of options remain in the corporate market. While the ISIN limit was set at 70%, CSPP has currently purchased only EUR 178bn (i.e. 25%) of the approximately EUR 700bn eligible non-financial corporate euro investment grade universe. And that's supplemented by an estimated gross supply of new eligible corporate bonds of EUR 150bn every year.

Secondly, this time, bank bonds are clearly in the running as the ECB seeks additional assets to target. And in the process, this will aid the financing cost of banks. The new sub-division of senior bank debt into preferred senior and bail-in senior (non-preferred or holding company) only helps to achieve this. Debt needs to be collateral eligible for the ECB to be able to purchase and since late December 2017, it’s become clear that preferred senior bank debt will continue to fulfil this criterion.

Using that as a guide and looking at all bonds with a one year or longer maturity indicates a new eligible asset class worth EUR 305bn is waiting for the ECB to target. Added to this outstanding amount we expect an uptick in annual issuance (up to EUR 100bn) which can also be purchased.

For example, the Italian bank preferred supply would certainly increase. Looking at the charts, we see that most of the bank debt the ECB could buy would be short-dated and it’s the French, Italian and Dutch banks that will benefit most from lower funding costs as 40%, 16% and 20% of the debt eligible is issued there. 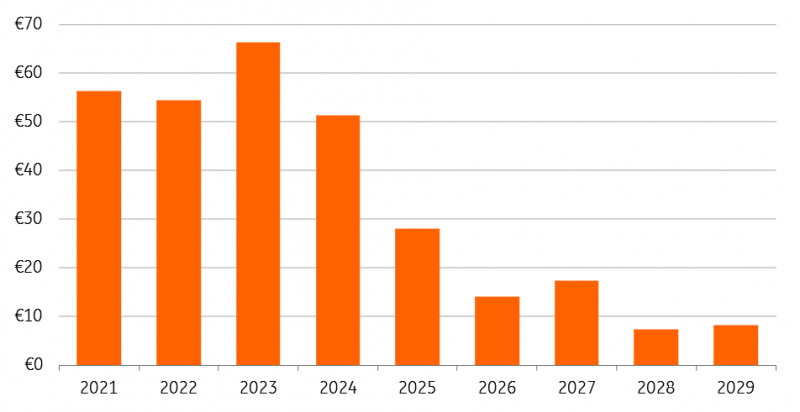 ECB will enter an already crowded market
The net effect of this renewed and expanded foray into the credit markets means the ECB adds its considerable weight to a market that is already sought after. Demand is already at high levels in European credit to satisfy the need for quality yield that low rates have created.

To detractors suggesting there's little left in the ECB's arsenal, we think otherwise. The Bank clearly's got a taste for corporate bonds

In essence, as the ECB adds itself to this crowded trade, as it did in 2016, it creates a squeezed credit market. Credit spreads will be well bid, either due to the expectation of or announcement of CSPP2. Both investment grade corporate and preferred senior bank debt will benefit directly but the crowding out effect will lead to larger circles of tightening in European credit markets as yield is added but credit risk rises for real money investors. In the longer term, that could lead to a risk transfer to asset managers and pension funds.

So to detractors suggesting there's little left in the ECB's arsenal, we think otherwise. The Bank clearly's got a taste for corporate bonds and from we think CSPP will be top of its list.