Elections to the European parliament take place over the next four days. Concerns are high that the centre ground continues to fragment and that populists succeed in sufficient numbers to derail further European integration. In this article we focus on four key battlegrounds to measure the march of the populists and assess its impact on FX and bond markets 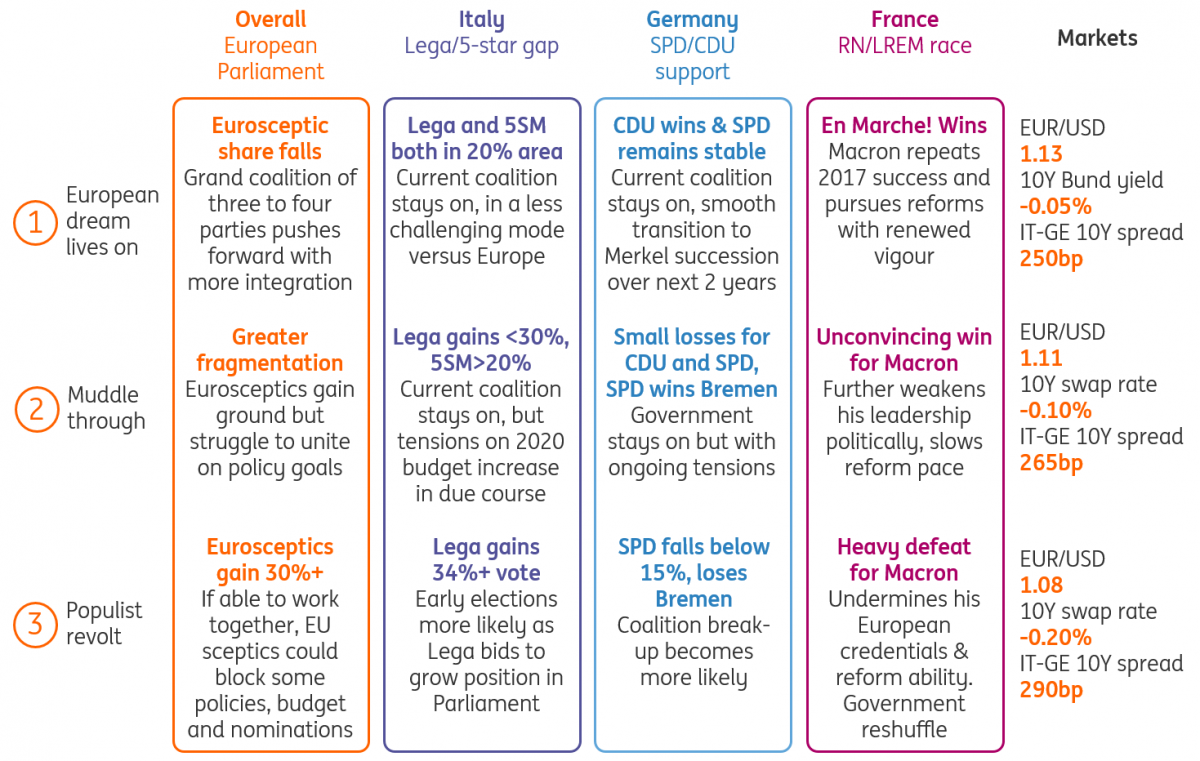 1. Eurosceptics gain one third of seats in the Parliament
Eurosceptic parties look set to make gains in the elections this weekend, led partly by the emergence of Italy’s Lega since the 2014 election. According to Politico, the three main eurosceptic factions within the European Parliament look set to secure just shy of a quarter of seats at this election which, combined, would be more than the traditional European People’s Party (EPP) or Socialist and Democrat (S&D) groups.

However, the big question will be whether the eurosceptic parties can organise into a united front on policy goals. While most populist/eurosceptic parties gained support on the refugee topic, they currently differ on possible solutions, as well as on other topics.

In other words, the European Parliament could become more fragmented, but not necessarily significantly more eurosceptic (these parties already hold 20% of seats collectively). For markets, the two things to watch will be a) if the collective eurosceptic share of the vote significantly exceeds 25% and b) whether these parties can work together as a united group over coming months.

2. German social democrats (SPD) support falls below 15% and loses in Bremen
The German Social Democrats (SPD) only very hesitantly joined the federal government last year and have pledged a mid-term review of the government’s work after the summer. The party is forecast to lose seats at the European elections, but there is also a risk of a symbolic defeat in the historic stronghold of Bremen in Sunday’s regional vote.

This, coupled with frequent speculation about Chancellor Angela Merkel stepping down before the 2021 elections, make for a stormy political summer.

Admittedly, neither a weakened CDU nor a defeated SPD have an interest in imminent snap elections, fearing further electoral losses. But a sufficiently heavy loss for the SPD on Sunday – particularly in Bremen – would increase the risk of the party pulling the plug on the government, preferring to rebuild support from the opposition.

3. Salvini’s Italian Lega gains more than 34% of the vote
These elections will be very relevant in determining the destiny of the current 5SM/Lega coalition government. If opinion polls prove accurate, Matteo Salvini’s Lega stands to reverse the balance of power and Salvini may be tempted to take advantage and move towards forming a new right-wing government. Here, a 34% share of the vote (compared to 17% at the last election) would leave Salvini in an extremely strong position.

A formal policy shift towards the need for aggressive tax cuts might be telling and stand in contrast to commitments made by Finance Minister Giovanni Tria. A collision course with the EU would be set.

The challenge for an emboldened Salvini will be crafting the new budget (budget season officially starts in early September, but the relevant political debate will kick off earlier). Government tension around that budget could easily result in a new election being called in the autumn. Ratings agencies will be scrutinising the budget negotiations during this period, at a time where Italian sovereign debt is already one-to-two notches from junk.

4. National Rally becomes France’s most popular party
There's a lot at stake for President Emmanuel Macron in these elections. His poll ratings have recently recovered, having fallen to a low of 15% in early December amid the "yellow vest" crisis. However, the latest seat projections for the European Parliament suggest that Macron's LREM (La Republique En Marche) party could be narrowly defeated for first place by Marine Le Pen's Rassemblement National (or National Rally). This would reduce his ability to drive reforms, and a government reshuffle would become likely.

It would also undermine his push to change the political balance in the EU. In theory, if he managed to enlarge ALDE (the Liberals and Democrats group within the Parliament), he would have a strong say in who the next head of the Commission will be (and therefore the ECB President). If the LREM result is perceived to be a defeat however, then this push for change would probably become more challenging.

A heavy defeat for Macron by eurosceptics could also embolden him to continue pursuing his hardline stance if the UK applies for a further extension to the Article 50 process in October. For now, most political commentators expect the UK to be granted a further delay if it ends up asking for one (which we think is likely). But if the wave of UK MEPs from the newly-formed Brexit Party seeks to disrupt the process of appointing leaders to the top Brussels jobs over the next few months, there is a risk that this hardline stance towards further Brexit delays could broaden out to other member states. 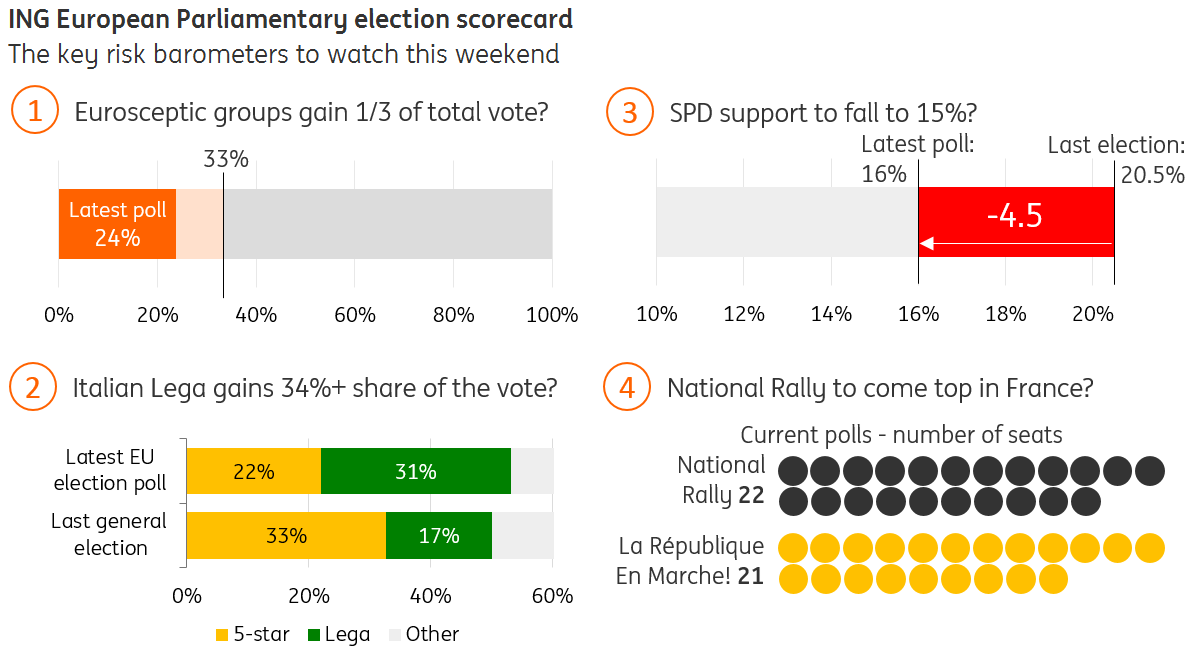 Source: Politico 'poll of polls', ING
Polling based on 22 May from Politico calculations 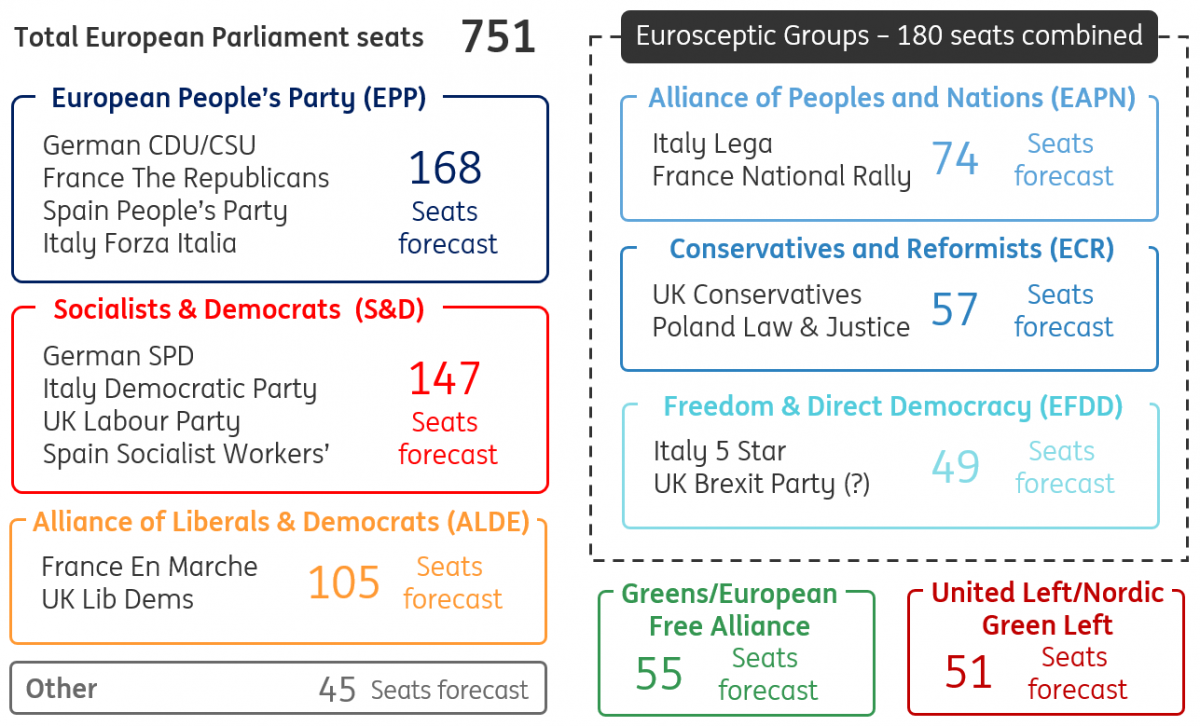