German recession fears, should we blame the Chinese car market?

The current slowdown of the German economy is closely linked to problems in the automotive sector. What role does China play in all of this?

The German economy appears to be stuck between solid domestic fundamentals and external risks. The industrial slowdown is beginning to have an impact on the domestic economy while the entire economy seems to be flirting with recession.

Cars have played and will continue to play an important role in this situation and among the multiple explanations for the problems in the automotive sector, surprisingly is China. Understanding recent developments in the Chinese automotive market is an important piece of the puzzle in comprehending the outlook for the German automotive market.

From WLTP to the US-China trade conflict
The delayed introduction of the new emissions standard - the worldwide light vehicles test procedure, or WLTP - and delays in complying with these new standards led to severe disruptions in German automotive production and delivery. The US-China trade war and subsequent slowdown of the Chinese economy have also contributed to Germany's car problems.

But the data shows a more nuanced picture. In 2018, vehicle sales in China dropped by some 3% YoY, while passenger car sales dropped by more than 4%YoY - the first decrease in over twenty years. However, German car manufacturers saw their sales increase by 2%.

New vehicle sales have dropped 13 months in a row 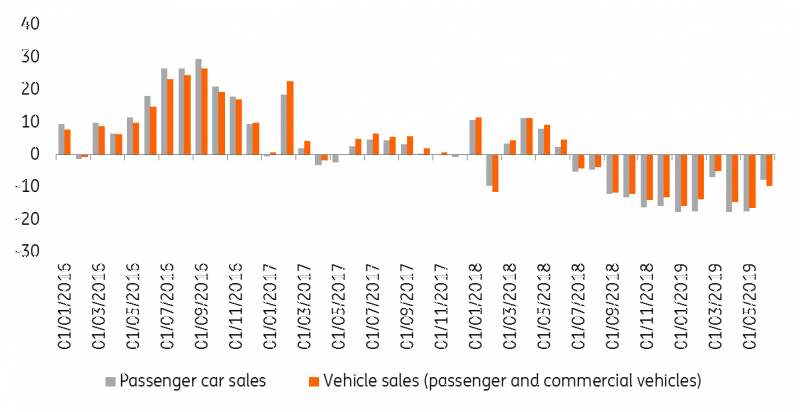 Direct impact of the trade conflict on the German automotive sector
The Chinese market is the most important market for the majority of German car manufacturers. In 2018, almost one-quarter of all cars sold in China were German. BMW and Daimler sold more than one-third of their total car sales in China. For Volkswagen, the share is even bigger at 40%.

Looking ahead, things aren't looking too good for German car manufacturers. New car sales in China have fallen for 13 months in a row, a slump that started in the second half of 2018 when the trade war between China and the US began to heat up.

In 2018, almost one-quarter of all cars sold in China were German. BMW and Daimler sold more than one-third of their total car sales in China

Given that some German car manufacturers actually export US-produced cars to China, there has been a clear and direct impact of the trade conflict on the German car industry. Having said that, the larger impact seems to be coming indirectly from lower Chinese consumer confidence. According to media reports, BMW and Mercedes car exports from the US to China have suffered due to the tariff hikes, which is probably why BMW has started to manufacture locally in China.

Structural factors and shift in the Chinese automotive market
Another factor, which is well known in Europe and has probably weighed more heavily on sales in recent months, is the switch to the new emission standard. By July 2020, all light vehicles in China need to comply with the China 6a emission standard, based on European and US regulations. But many provinces rushed ahead and made the new standard mandatory a year earlier to comply with environmental protection campaigns.

In Europe, the impact of adopting this new standard placed a huge strain on the passenger car market last year such that new passenger car registrations fell more sharply (in absolute terms) than during the global financial crisis.

In China, although car dealers substantially discounted prices for China 5-standard vehicles before the deadline, consumers were reluctant to make purchases, probably waiting for passenger cars with the new emission standard instead. Automotive retail sales saw a surge only in June, with car dealers offering heavy price reductions. The destocking of China 5-emission standard vehicles might be responsible for lower orders from dealers too. But with the new standard now in place, a rebound in car sales might be round the corner.

Forecasts of the Chinese car market have assumed low ownership rates projecting plenty of growth potential in the coming years, but it's quite possible that this growth potential will be impaired by ride-hailing and/or car-sharing

The phasing out of tax incentives for small cars from the end of 2017, a government programme that ran for three years, is also likely to continue to have an impact on the Chinese market, as car purchases were brought forward.

Alongside cyclical developments, there are also structural changes in the Chinese automotive market affecting German car sales. China is already the largest ride-hailing market in the world, with over 459 million customers and a turnover of around US$ 53 billion. In the US, there are currently 66 million users generating US$ 49 billion in turnover. To put things into perspective, one-third of the Chinese population already uses alternative mobility solutions, while in the US the figure is around 20 percent and in the EU it is just 18 percent - a trend that is likely to grow in the coming years. Admittedly, it's impossible to tell whether users are exclusively using ride-hailing or whether it is complementary to owning a car.

To date, forecasts of the Chinese car market have assumed that low ownership rates offer sufficient growth potential in the coming years, but it's quite possible that this growth potential will be impaired by ride-hailing and/or car-sharing.

Another structural change is the transition towards electric car production and sales, which the Chinese government is supporting. Indeed, sales of electric cars in China are still going strong, increasing by 50 percent in the first half of 2019 compared to 1H18, but the subsidies in this segment will be phased out between 2020 and 2021.

The biggest threat to German automotives is...
So, we think the current crumbling of the Chinese car market appears to be a simultaneous combination of cyclical factors, one-off effects and structural changes.

And for the German economy, it's not actually the trade conflict that is most concerning but the structural shifts in the Chinese automotive market, which could turn out to be one of the biggest threats in the years ahead.