The eurozone’s Japanification - more to come

With the eurozone economy stuck in a low growth, low inflation and low rates environment, it's really hard not to make 'Japanification' comparisons. If we're honest, the eurozone is probably already in the thick of it, which means rates are likely to remain lower for longer and every new crisis or recession will bring the bloc closer to more Japanification

Haruhiko Kuroda, Governor of the Bank of Japan, left, talks to Mario Draghi, President of the ECB in 2015

A brief history of Japan’s lost decades – Japan’s first crisis
The roots of Japan’s subdued economic performance can be traced back as far as the late 1980s.

In September 1985, following the Plaza Accord – an agreement by Japan, the United States, France, West Germany and the UK to depreciate the US dollar against the Japanese yen and the German Deutsche mark, the Japanese yen appreciated sharply. Being highly export-oriented, Japan’s exports and GDP growth dropped considerably in 1986. Because of the deteriorating economy, to stop speculative capital inflows and limit the yen’s appreciation, the Bank of Japan lowered interest rates from 5% to 2.5% between January 1986 and February 1987. Furthermore, fiscal packages were compiled in September 1985 and May 1987 to support the economy. Although the economy rebounded significantly in the second quarter of 1987, the central bank kept its policy rate at 2.5% until May 1989.

Fuelled by a mixture of declining lending standards, financial regulation in the years before, low interest rates, cheap money and the belief, that the only way was up, Japanese stock and real estate prices grew at a staggering speed towards the end of 1986 and until 1990, pushing the Nikkei index from 13,000 points to an all-time high of 39,000 points in December 1989. [1]

In May 1989, the central bank raised interest rates from 2.5% to 6% in just 16 months as it became concerned about asset price increases, banks’ lending behaviour and upward pressure on prices. At the beginning of 1990, stock prices started to decline with the yen depreciating and long-term yields increasing. However, the BoJ kept raising rates until August 1990 – also in the wake of the Gulf war leading to an increase in oil prices. Subsequently, the lending standards of banks became more cautious, money supply growth decelerated sharply and the pace of economic growth started to slow.

When the stock market and real estate bubble started to burst in 1990 and 1991, the Japanese banking sector faced a pile of non-performing loans with Japan’s corporate sector being characterised by excess debt. According to the IMF’s systemic banking crises database, Japan’s non-performing loans (NPLs) peaked at 35% (of total loans) during the banking crisis - a level which neither Greece nor Italy reached during the European sovereign debt crisis. However, the magnitude was not immediately recognised and authorities were slow in reacting. Only in the second half of the 1990s, when large institutions started to fail, the full extent became visible. [2]

The Bank of Japan's courageous monetary policy
Meanwhile, the Bank of Japan was quite brave with introducing new monetary policy measures beyond textbook knowledge. In October 1999, the interest rate was lowered to zero and ZIRP (zero interest rate policy) was born. Japan's central bank started to use quantitative easing policies, back in 2001, setting the outstanding balance of current accounts at the Bank as the operating target [3] . But the monetary stimulus didn't result in higher inflation as the authorities had waited too long before taking decisive action. Initially, the BoJ had raised rates during the burst instead of lowering them and it was only in 1999, a comprehensive disclosure requirement for bad loans was put in place.

Japan’s low inflation seems to be more structural, causing low-interest rates, for which numerous factors can be cited. Research has identified factors like the “zero-lower bound on nominal interest rates, public attitudes toward the price level, central bank communication, weaker growth expectations coupled with declining potential growth or the lower natural rate of interest, risk-averse banking behaviours, deregulation in the distribution chain and the rise of emerging economies” as possible factors depressing inflation.[4]

The Federal Reserve Bank of St. Louis (2018) adds to that technological progress, globalisation and demographic transitions [5]. Another factor weighing on inflation might actually be deleveraging. After the bursting of the bubble, the private sector deleveraged, cutting borrowing and spending.[6] 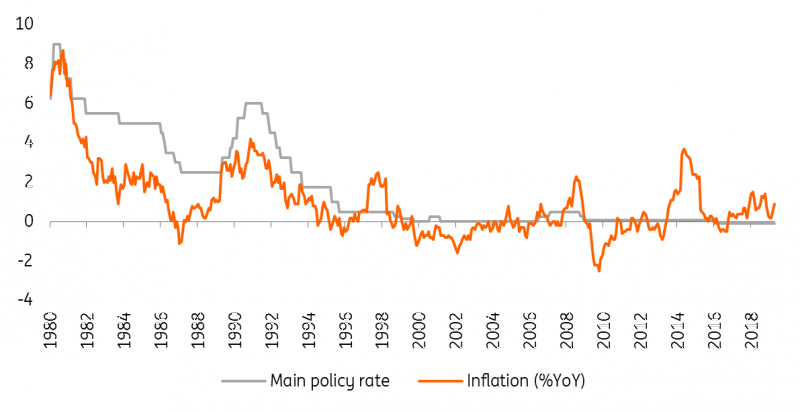 Eurozone’s lessons from Japan – the same causes or only similarities?
By now, an environment of low inflation has also reached the eurozone. It probably is structurally low inflation, driven by globalisation and digitalisation. However, the question is whether Japan-specific factors can help to explain the current low growth and low inflation situation or whether the eurozone and Japan are ‘only’ experiencing similar external factors.

Savings glut, central bank credibility, globalisation, the 1990s and 2000s saw a general decline in inflation and interest rate levels, which go beyond Japanification. But right now, the eurozone is showing similarities with Japan of the early 1990s. A financial crisis turns into an economic crisis, which then turns into a banking crisis, and finally into an existential crisis.

So why should we care? Because of the next downturn…
While Japan’s experiences in the 1990s were engraving, they are not enough to explain Japan’s prolonged subdued economic growth environment up until today. Timing was not on its side.

The recovery of the Japanese economy was thrown back by three major events: the Asian crisis in 1997/1998, the dot-com bubble burst in 2000/2001 and finally and most importantly the global financial crisis of 2008/2009. Whenever it looked as if the Japanese economy had finally bottomed out, the next external shock came along. With the economy growing by 1.8% on average between 2003 and 2005, the Japanese central bank cautiously raised its main interest rate in July 2006 by 25 basis points to 50 basis points in September 2008.

But then, the financial crisis hit and the hiking cycle was over before it really began.

GDP growth in Japan and inflation (%) 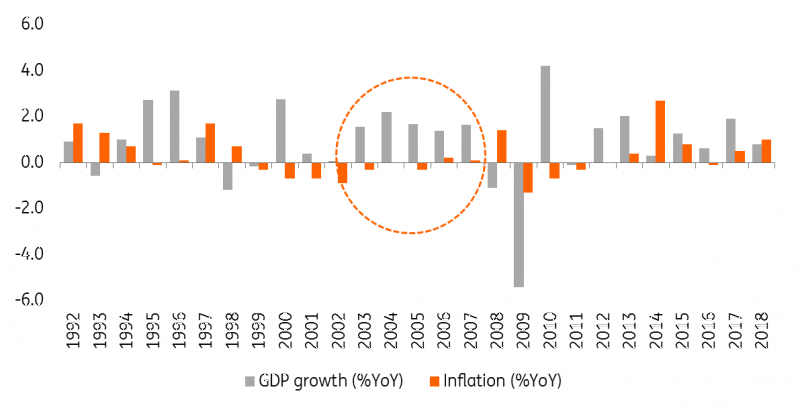 This is an important lesson for the Eurozone: the next crisis can always be just around the corner. Without a strong recovery, it is difficult to escape the low growth, low inflation and subsequently low rates environment. An economic upturn could quickly be over and monetary policy might not have enough ammunition up its sleeve, with interest rates remaining stuck at the zero lower bound for years to come.

Japan's central bank hasn’t raised main interest rate more than 50 basis points for over 24 years now and still has the largest central bank balance sheet measured as a percentage of GDP compared to the US and the eurozone. So, for the eurozone, the most important lesson is probably not so much the root cause of Japanification but the desperate attempts to get out it.

What are the developments the Eurozone could be facing soon?

Economic developments in Japan and the Eurozone
(mean values over respective periods, %)

Why Japanification might be worse for the eurozone than for Japan
Having said all of this, Japanification doesn't have to be a bad thing, instead, it is rather a description of the state of an economy.

Despite Japan’s prolonged period of subdued economic performance, the economy is still the third largest in terms of nominal GDP and is one of the most innovative and digitally conscious economies in the world and thanks to the government’s fiscal packages, Japan continues to enjoy a modern and well-maintained infrastructure. At the same time, however, Japan is also a relatively homogenous society.

On the contrary, in the heterogeneous eurozone, political tensions within and between countries might rise given differing interests, economic developments and the controversial use of fiscal policies among members, making forward-looking reforms more important than ever. Particularly, the discussion about the role of fiscal policy in attempts to stabilise or kick-start the economy clearly have the potential for greater conflicts in the eurozone than in Japan.

For the eurozone, the lessons from the future from Japanification are more important than the lessons from the past. The Japanese experiences show that it will be very hard to actually escape a low growth and low inflation environment without reverting to loose fiscal policies and policies aimed at increasing productivity growth. For the ECB, this means that even looking beyond the short-term horizon with economic and trade uncertainties, the possibility of Fed rate cuts and the ECB’s easing bias, there will not be much room for rate hikes in the coming years. 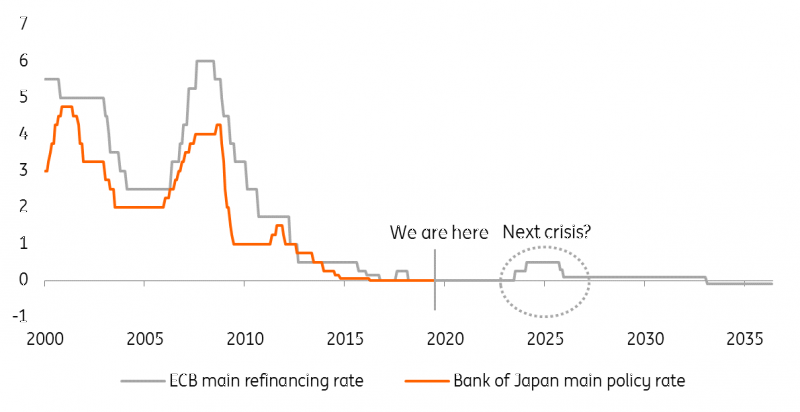 References
IMF World economic outlook: tensions from the two-speed recovery, 2001; Nakaso, H., Japan's Economy and the Bank of Japan: Yesterday, Today, and Tomorrow, Speech at the Economic Conference in Tokyo, 2016; Ito, T., Japanization: Is it endemic or epidemic? NBER Working Paper, 2016
Nakaso, H., The financial crisis in Japan during the 1990s: how the Bank of Japan responded and the lessons learnt, BIS Papers, 2001; Hoshi, T., Kashyap, A., The Japanese Banking Crisis: Where did it come from and how will it end?, NBER Working Paper, 1999.
Nakaso, H., Evolving Monetary Policy: The Bank of Japan’s Experience, Speech at the Central Banking Seminar, 2017.
Nishizaki, K., Sekine, T., Ueno, Y., Chronic Deflation in Japan, Bank of Japan Working Paper, 2012.
Sanchez, J. M., Kim, H. S., Why is inflation so low, https://www.stlouisfed.org/publications/regional-economist/first-quarter-2018/why-inflation-so-low#endnotes
Borio, C., Low inflation and rising global debt: just a coincidence?, 2018: https://www.bis.org/speeches/sp180802.htm; Kushinov, D., Müller, G. J., Wolf, M., Deleveraging, deflation and depreciation in the euro area, 2015.
Nakao, T., Japan’s experience with fiscal policy in the 1990s in the aftermath of the bubble economy, 2002.